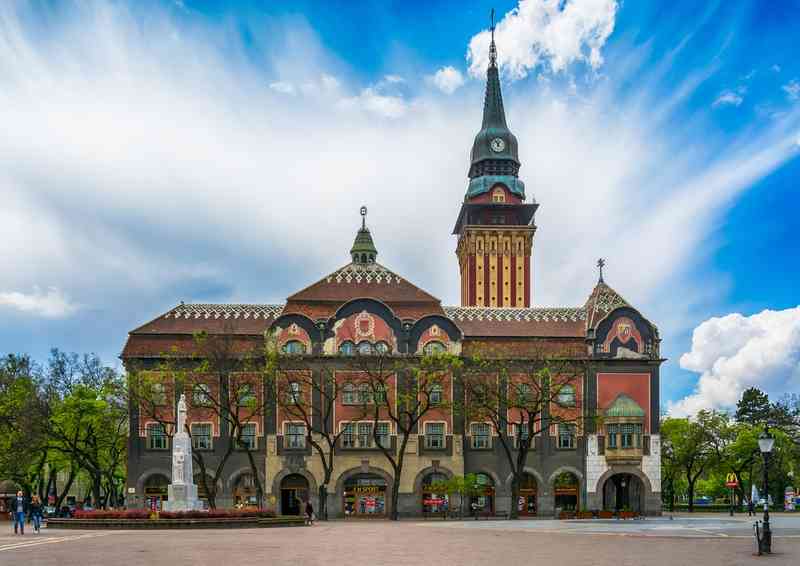 It’s easy to tell when Subotica in the north of Serbia had its golden age. Because this cultured city is bursting with playful Art Nouveau halls and palaces since the beginning of the 20th century. The tour de force is the City Hall and its 45-meter tower, but this is just one of many masterworks that you have to cram into a sightseeing tour.
Subotica’s places of worship, from the Art Nouveau synagogue to the 18th-century cathedral also deserve your attention. And on the fringe of the city among vineyards is Palić. This is a lakeside resort that also came to the fore in the early 1900s, and is now making a comeback.

Let’s explore the best things to do in Subotica:

The majestic city hall is an Art Nouveau masterpiece, completed in 1912. Subotica’s central landmark was conceived by a team of Hungarian-Jewish architects, Dezső Jakab and Marcell Komor.
The pair were students of Ödön Lechner, who has been described as the “Hungarian Gaudí”. What you get is Art Nouveau’s sinuous decoration and use of wrought iron, ceramics, and stained glass, combined motifs inspired by Hungarian folklore.
Show up at noon and you’ll be treated to an English-language tour of the opulent interiors, and you’ll be able to go up to the observation platform 45 meters above Trg Slobode.

Below the colossal town hall, and enclosed by elegant buildings like the People’s Theatre, is the city’s extensive central square.
This is a leafy space with lawns, paths traced by iron gaslights, and a few monuments of its own to take in.
There’s a statue of Jovan Nenad, the short-lived Serbian Emperor who was killed in 1527 one year into his reign.
You can also idle for a moment beside the Green (1985) and Blue Fountain (2001), made with the same Zolnay tiles that adorn Subotic’s Art Nouveau masterpieces.
The square also stages concerts and markets during the year.
And on an ordinary day, people will meet up at Trg Slobode to stroll and chat in the greenery.

The city’s Roman Catholic cathedral is from the 1770s when Subotica was in the Habsburg Monarchy.
Theresa of Avila is also the patron saint of Subotica and appears on the city’s coat of arms.
The church, which in 1974 was raised by Pope Paul VI into the minor basilica, has a Baroque design by Franz Kaufmann from Pest.
Despite its rather narrow plant, the bell towers are 64 meters tall and if you look closely you’ll see the image of Mary on the roof between them.
Artists from Pest were also recruited for the interior decoration; see the paintings on the walls and above the central aisle, as well as the stone stele on the Perčić family tomb from 1824.

Another of Subotica’s Art Nouveau treasures is the city’s synagogue, finished in 1903 and also drawn up by Dezső Jakab and Marcell Komor.
It’s a synagogue that resembles no other, partly because there’s a state-of-the-art steel frame in its walls.
This gave the architects the freedom to create a self-supporting dome, painted with gold.
The carnations, peacock feathers, and tulip motifs that show up here and there are all traits of Hungarian Art Nouveau.
If you’d like to arrange a tour of the interior you can ask at the tourist office in Subotica’s city hall.

Even before you consider what’s inside, this museum has to be on your agenda for its architecture.
The Dömötör Palace, which once housed a printing press was designed in the Darmstadt Art Nouveau style by the Hungarian Vágó brothers.
Like all of their works the palace has its signature motif of two birds, so see if you can spot it on the facade.
The building was renovated to fit the museum a decade ago and has a history exhibition on the lower floor and a gallery for regional art upstairs.
Check the windows, doors, and stairway banisters for whimsical Art Nouveau fittings.

In the same vein, Subotica’s museum of modern art is a must-see for its splendid venue.
This is the Raichle Palace, taking the name of its designer, Ferenc Raichle.
The palace dates to 1904 and was intended as the architect’s home and studio.
There are lots of surprises in store inside and in the palace’s garden.
But you can also peruse 1,200 works of modern art from the second half of the 20th century in the permanent collection, alongside temporary exhibitions.

There’s still enough Art Nouveau heritage remaining to cram into a walking trip around the city center.
All of this is in the Hungarian Secessionist style and dates to the end of the 19th or first few years of the 20th century.
One of the standouts is the Former Subotica Savings Bank, also the work of Dezső Jakab and Marcell Komor.
It went up after the Synagogue but before the City Hall.
Then on the cultivated Korzo Street sits the Former Golden Lamb Hotel, in the Jugendstil by Subotica native Titus Mačković.
And lastly, one of the earlier landmarks is the Leović Palace from 1893 by the Franca Rajhla Park, and unmistakable for its gables.

In a city with large congregations of both Catholic and Orthodox Christians, it can be enlightening to step inside the two main churches to compare the interiors.
The city’s Serbian Orthodox Church is tucked in a garden with mature trees and dates to 1726. It has the Baroque architecture that was prevalent in Central Europe at the time.
And although you wouldn’t know to look at it, the tower is much newer and was raised in 1910. The current iconostasis was also crafted during these works, and this surrounds the gold-painted icons with dainty borders of gilded stucco.

Subotica’s Franciscan monastery has been at this location since 1723 and still has communities of monks and nuns.
The church here now is a little newer and boasts a Romanesque Revival design.
You’ll know this beautiful landmark by its twin pointed spires and circular apse.
The whole monastery was built over the ruins of a medieval fortress that had stood since the 1400s.
The friary attached to the church is still intact and has its own chapel with a painting of the Black Madonna on its altar.

In a big compound, a couple of kilometers west of the city is the flea market, open for business every day from 06:00 to 15:00. The market does a roaring trade most days, but is absolutely rammed with shoppers on summer weekends.
It’s a good if the hectic way to get a snapshot of everyday life in the city.
You can buy almost anything under the sun, from clothing to electronics, and it’s also an affordable way to stock up on fresh produce or pastries.
Hungarians across the border to shop here as due to a tax loophole they can buy Hungarian items cheaper in Subotica than in their own country!

On a lake next to the city, Palić is a sweet old resort that is practically a suburb of Subotica.
People began to flock to the lake’s shores in the 1880s to bathe in the mud, which was ascribed to healing qualities.
And like Subotica Palić has its fair share of Art Nouveau heritage.
So you can come for the picturesque nature as well as the Grand Terrace, Women’s Lido, and Water Tower all with that enthralling Hungarian Secessionist design.
On warm days there’s no better place to be: Whether you’re strolling on the promenade, lazing on the beach or making a splash on the lake, sailing, canoeing, or fishing.

You may be hesitant about zoos, but the one in Palić is a pleasant surprise.
Apart from the bears, which are in rather cramped cages, Palić Zoo’s animals have roomy habitats and all look well looked after.
And the park’s deep woodland gives you the feeling of being in the wilderness.
There are almost 300 plant species, counting giant Lebanon cedars and sequoias.
And as for the animals, there are elephants, zebras, lions, and emus, to name some of the 65 species.